A new normal service has resumed. It will be different, but just as good.

Most of the changes will happen behind the scenes with deep cleans and longer gaps between stays. If you want to know more have a look at the risk assessment and cleaning checklist. All guests will be sent further information after booking including pre and post arrival questionnaires.

Bookings now being taken for stays after the 13 July and refunds will be given should the situation change and I need to close. See you all soon.

That’s the strap line but is it true?

The weekend before last it was the turn of the walkers.  Many of my guests head for Snowdon (*sigh*) and so did these, but with a difference.  One lot tackled the Snowdon Horseshoe, that’s a serious scramble, and my other guests ticked off Snowdon en route to Ben Nevis and then on to Scafell. 3 Peaks in 3 Days.

Back to normal last weekend with mountain bikers in residence.  Guests in the Stable headed to Antur Stiniog and my other guests rode Revolution Bike Park and Coed y Brenin as part of a tour of Wales which also took in Black Mountain Bike Park, Bike Park Wales and Afan Forest Park before heading back to Scotland.  And that was all in 5 days.

And here’s a picture of me at Antur Stiniog as I can’t think of another one to use.

Is the marketing blurb correct?  That’s not for me to say.

I have to mention it although I don’t want to and I have tried my best to resist.  It’s less than 4 weeks away.  As you can probably tell, I’m not a fan.  At all.  So if you do stay here over Christmas do not expect tinsel, baubles, flashing fairy lights or Christmas trees.  There are some of those – Christmas trees that is and real ones too, still in the ground – in the woods behind the hill and there’s a holly tree outside the Stable.  I have been known to provide mince pies but they’re not just for Christmas, I like them.  I also like sprouts.  Do expect a warm and cosy cottage (there’s underfloor heating), spectacular views, plenty of places and time to cycle or walk and peace and quiet.

The Barn is available until 27 December and the Stable until 26 December.  Dogs (or cats if you must) are welcome in the Stable.  £85 per night, minimum 2 night stay.

From our house we have a good view of one side the range of hills known as the Berwyn.

I spend a lot of time staring at these hills, watching as they change by the second with the passage of clouds over them and noting how they change with the progress of the seasons.  This year I have also spent a lot of time riding over them.  There is one metaled road across the top of the Berwyn, which in itself makes for a beautiful road bike ride, but, as I am discovering, there are many old green lanes and drovers’ tracks that cross the tops, dipping in and out of steep-sided blind valleys.  You know that if you descend from the tops you are going to have to work to get out of the valley.

My father’s family is from a small place called Froncysyllte at the northern end of the Berwyn, made famous by Thomas Telford’s aqueduct which carries the Llangollen Canal across the River Dee.  My paternal grandfather was born there in 1917 and met my grandmother there when she was visiting her family in the valley.  He only left the place when World War II dragged him away.  Subsequently he became a vintner and went on in the 1950s to invent and name the drink ‘The Snowball’ (for which he won some shopping vouchers and bought an highly fashionable studio couch (sofa bed to you and me).

Anyway, all this is a roundabout way of saying that I have some connection with the area.  In fact, and this may be sentimental mumbo jumbo, I would say I felt a profound sense of homecoming (something akin the fulfillment of the Welsh sense of hiraeth, which refers to the longing for a place, tinged with sadness for the departed) when my wife and I decided to move to near Bala just over three years ago.  I have since then been learning Welsh and also my way around the area.  As a child I spent many holidays in the area and before I was really aware of notions of longing I was conscious that my heart used to lift as we crossed the border into Wales and the hazy outlines of the Berwyn would start to emerge.

The main venue for my childhood holidays was a small village in the Tanat Valley, called Llangynog.  I used to ride my Raleigh Burner round the disused quarry there, and drag the heavy little bike to the top of the steep hills that surrounded the area, then descend with no meaningful form of braking as the flexy calipers failed to grip the yellow plastic ‘mag’ wheels. There was literally no stopping me.  The same disused quarry is now the Revolution Bike Park and the obstacles created there by the Athertons are well beyond the capabilities of me and my Burner or indeed of me on any bike.

More to follow as our small boy becomes a man (of sorts) and reacquaints himself with the Berwyn.

Yep, it’s started, we’ve begun work on the long awaited Ty Beic bike track.  Take your mind off politics for a few moments and have a look what we’ve been doing in our field (the very steep one).

As most things do, it’s starts at the top and then goes quickly downhill.  Before you know it you’re at the bottom of the field and hitting a berm which in theory should propel you towards the top.  Hmmm.  And then the fun really starts with a tight and twisty climb.  The test pilot did discover that maybe some of the turns are a bit too steep and a bit too tight or maybe a 35mm stem really is just too short.  There’s work to be done here.
We are full in June but we still have gaps in July and August if you fancy giving it a test ride or even lending a hand.  Prices per cottage are £80 a night or £475 a week and there are discounts if you are a Singletrack Subscriber.  We don’t charge for digging.

I have a confession.  I enjoy road cycling as much if not more so than mountain biking.  I didn’t feel that way when we lived in South London where I endured and survived a 7 mile commute into central London everyday and weekend rides into Kent meant a 20 minute slog through South London’s Mean Streets.  I don’t cycle as far as I used to and all day epics are a thing of the past – I blame that dog – but a 30 mile ride can be just as worthwhile and rewarding.  The roads around here are so quiet that we can cycle for miles without seeing a car and there are very few roundabouts or traffic lights to break the rhythm.  Bala’s driving test centre is famous, and much in demand, as one of the few centres where a test doesn’t involve such things.  I took my driving test a couple of years ago in Bala, not having the need for a car when living in London.  The first time I negotiated a roundabout and dual carriageway behind a wheel was driving to Chester and back to visit Richard in hospital after he broke his hand.  But that’s another story.

The weather last week was great so we had no excuse not to get out on the bikes.  Sunday was a 32 mile ride (with 3000ft of climbing) over Bwlch y Groes, down to Lake Vyrnwy and back over Rhosygwalia.  Monday was another 30 mile ride through Llandderfel to the top of the Berwyn before turning round and heading back to Bala with a detour around Llyn Tegid.  We had planned to ride over the Berwyns to Llangynog and then Vyrnwy, Bwlch y Groes back to Bala but realised we would be late for our Welsh conversational class in Stori, or ‘siarad caci tarw yn Gymraeg’ as we like to call it, so we cut the ride short. Thursday is chaingang night, a 20 mile thrash starting and finishing at the Bryntirion.

This time last year Richard was busy making windows for the Barn (with a little help from Jac), the roof on the extension had just been finished and we had barely started work on the Stable. 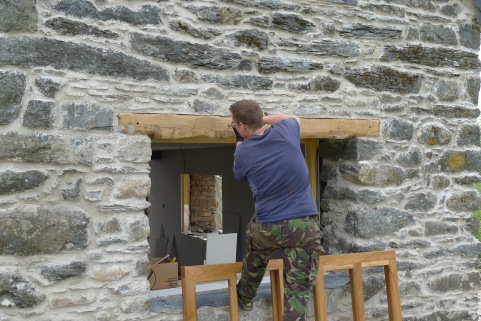 with a little help from Jac 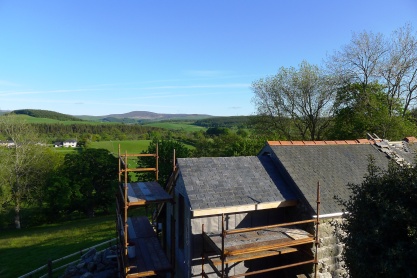 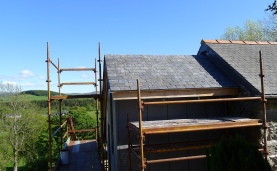 ground floor/living area in the Stable

A year later and we’re all finished and fully occupied… 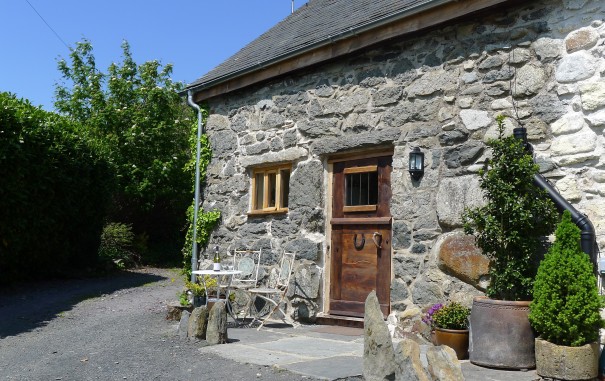 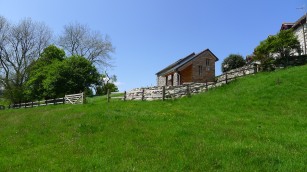 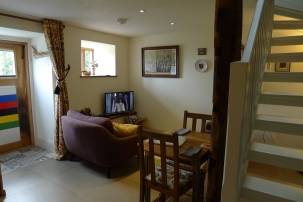 you looking at me? 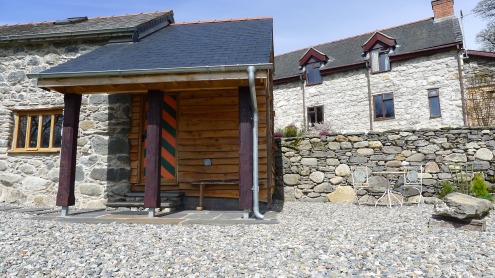 But we haven’t stopped working.  This summer we’re going to build a pump track in our field and a proper fire pit with seating.  Watch this space.

Begin with four bikes and three dogs.  Add dry dusty trails and sneaky singletrack.  Throw in some big views and empty landscapes.  Add lashings of sunshine and a dash of Welsh beer and cider, combine with lots of enthusiasm.  The result is two satisfied customers, three tired dogs and two very happy hosts. 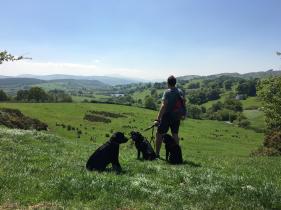 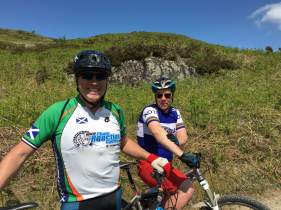 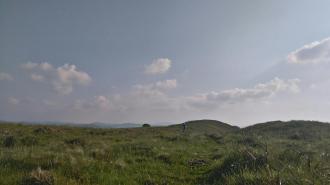 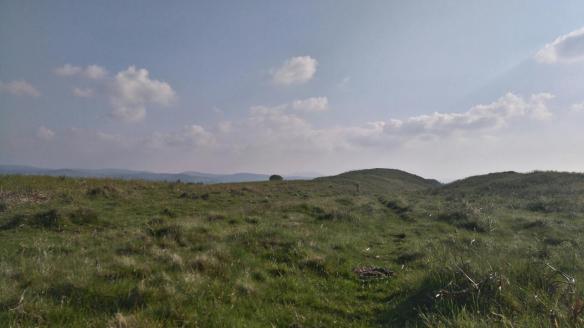 MB Wales has made a film about mountain biking in Wales.  From trail centres, epic downhills, natural trails and family rides, it manages to convey in just over 5 minutes the incredible variety of riding to be enjoyed in Wales.  It would be rude not to share.

It’s been a very wet winter here.  I’m not complaining – we haven’t been flooded out of our home unlike a lot of people, but it has meant that the natural riding has been pretty much out of bounds.  But every now and again the sun shines brightly and the landscape is transformed.  And I’m reminded that summer is not that far away.

Walking the dog the other day, the sun came out and the shadow suddenly revealed all the sheep trails criss-crossing the hill.  I’ve suddenly discovered a new series of trails for when things are a bit drier.  This stuff is so narrow it’s not even singletrack – more semitrack, giving just enough to ride across the steep hillside. 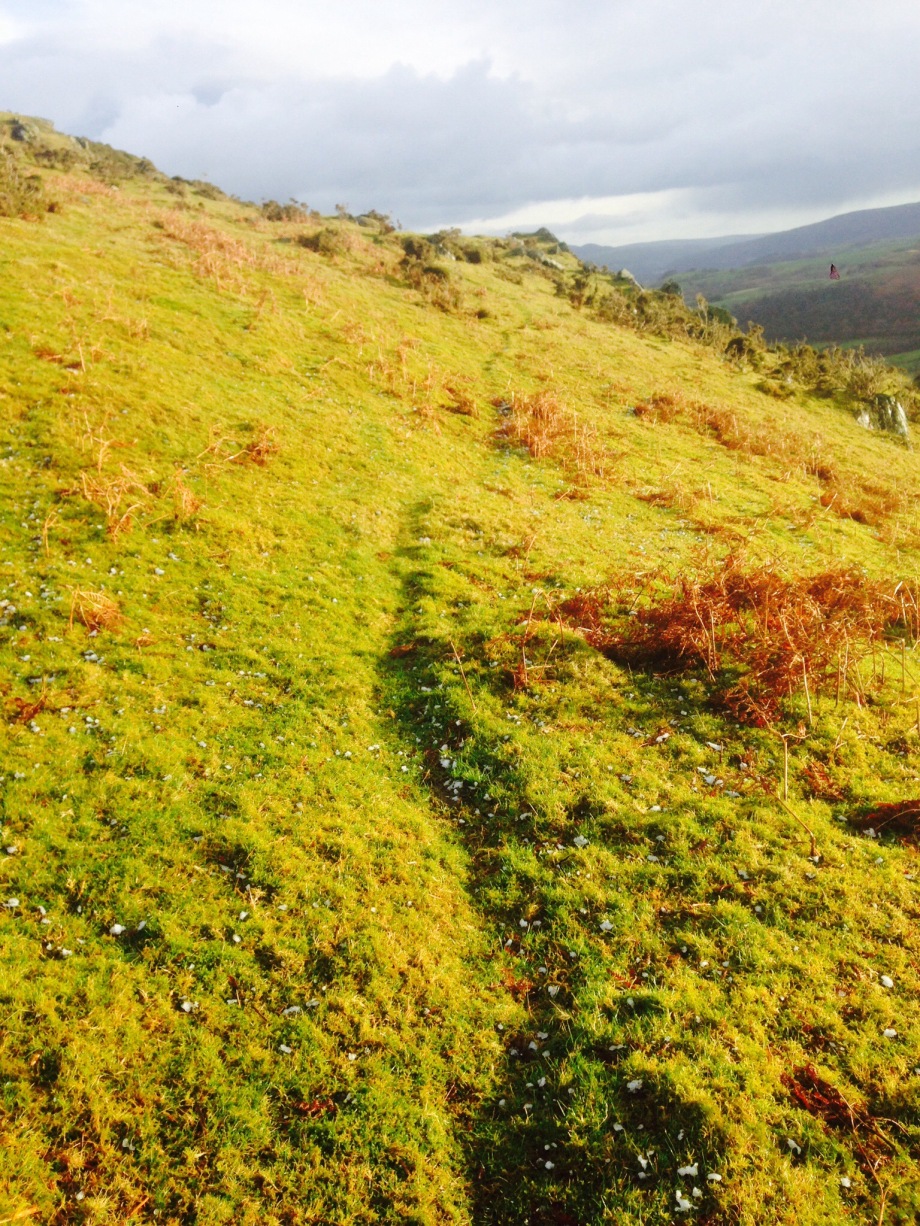